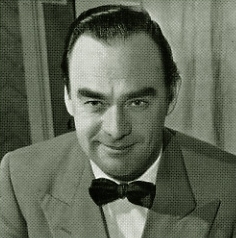 What follows are the sleeve notes from one of his LPs. Circa mid 50's.  Have also included the small photo of him.

Harry Farmer is the son of a Walsall music dealer and the environment encouraged him to take to music at an early age, giving his first broadcast when he was twelve years
old. He won a scholarship (the adjudicator was Sir Adrian Boult) at the age of fourteen and planned to be a concert pianist. Before this happened however he became
attracted to the organ and received a sound tuition on this instrument under the late T. W. North, borough organist of Wallsall as part of the scholarship award. To get more
funds for further lessons he became a cinema organist with the Gaumont British circuit, playing at Ipswich under the name of Andreas. The lessons with Mr. North were
the last, from there on, experience was to be the teacher. A lot of classical music was included in Wurlitzer recitals and, on one occasion, the theatre was taken over by a rich
influential client of the district so that Harry could give a private command performance to his guests.

He left Ipswich to join a private cinema firm in East London where he was known as Henry Farmer ("Good ol' 'Enry" was the usual greeting from the barrow-boys down
Angel Lane). He left this job to join the Granada Theatres circuit and soon got promotion with the group, broadcasting from the Granada, Bedford six months later. When
Harold Ramsey left Harry took over the broadcasts from the Granada, Tooting as well, becoming the first organist to have two regular recording venues.

He moved to a house in Sutton and on backstage of a cinema there he discovered the first Hammond organ to come into Britain from America. He practised on it for more
than twelve months before the instruments became known in Britain, and then featured it at Radiolympia in duets with Donald Thorne in 1937. Although the organs were well
apart the two organists were able to hear each other through the speakers.

Though continuing to work for the Granada circuit, he now formed a trio with pianist Jimmy Leach. This was called "Organola" and was originally intended for radio only.
Nola was used as a signature tune. Tony Lowry, the musical supervisor of Granada Theatres suggested this should be continued on the variety stage, and Harry agreed to try
the experiment - it was a success.

During the war Harry joined the Royal Armoured Corps and reached the exalted rank of Corporal Driving Instructor. One day he was talking to the Regimental Barber and
happened to mention his profession. The barber said he had an idea he could persuade the officers of the depot to invest in an organ (barbers have a great influence over their
victims when they are in the chair). Although only a Trooper himself, his persuasion worked (by what method we shall never know) and a Hammond organ was bought.
They became the first Army unit to have such a group and played for the depot dances in the gymnasium. The B.B.C. in Bristol heard of the group and wired the gymnasium
for sound and broadcasts followed. These were followed by Overseas Broadcasts and visits to the Stage Door Canteen in company with some of the leading American bands.
In 1946 he was transferred to the central pool of artists responsible for the Stars in Battledress shows, and toured Germany with a show he wrote called "Wit and Polish".

Harry Farmer left the Army in 1946 and in the summer played at the Blue Lagoon Ballroom in Newquay. One of the tunes that was featured there with some success was
Slipped disc. There were lightning dashes back to the studios for broadcasts in Variety Bandbox, the Hammond organ being carried in a trailer at the back of the car.
Broadcasts in They're Out, Bright and Early, Morning Rhythm, Music While You Work, Workers' Playtime became regular engag-ments. He has recorded for Decca some
pleasant-sounding records like hi
s "BingCrosby Favourites"(LF 1194), "Early Talkie Memories"(LF 1202), and "Deep Purple" (LK 4149).

Harry still gets around the country doing one-night stands and acting as entertainment host in a Cornwall hotel every summer at St. Austell. This issue is one of his best
recording sessions to date and one which will be wanted by all people who like to hear a Hammond organ excellently played and recorded.

Obviously those notes are now in past tense. He was born 1912 and died 1986. Ironically, although I live in St Austell...not far from the venue where he played,
letters in the local papers asking for information or photos, have revealed nothing!