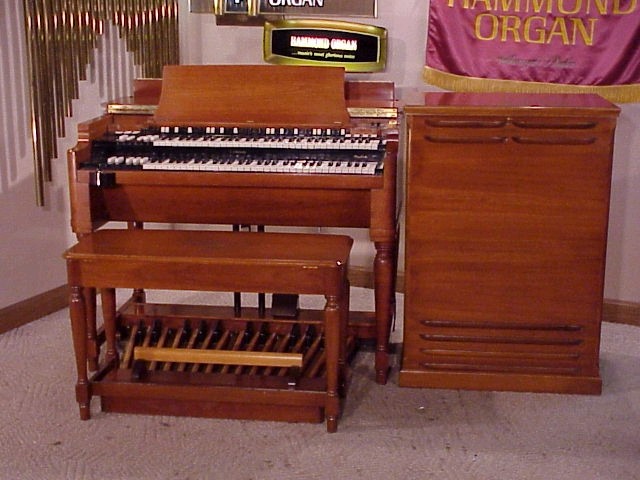 In 1935, the Hammond Model A organ was introduced causing a tremendous landslide in sales.  Hammond’s popularity over the decades was phenomenal with many professional
organists using it as well as being found in numerous churches, restaurants, auditoriums and homes around the world.  In 1955, the Hammond B-3 was introduced and became
the standard by which all other organs were judged.  In the modernization of the Hammond line in 1965, the Hammond X-66 was introduced.  This was a combination of the
general Hammond design and a theatre organ and is sought by many organ aficionados.

For more information about Hammond tone wheel organs, click here for an article by Eric Larson:

(The Hammnd Organ by Eric Larson)

In spite of the overwhelming success of Hammond’s famous tone wheel generator, the Hammond Organ Company did produce instruments of electronic design.  All
Hammond organs today are electronic, but not so in the early years.

Hammond’s first electronic instrument was the Novachord, basically a piano with organ and orchestral tones.

This was soon followed by the Solovox, a short keyboard attached to the front of a piano to produce organ sounds along with the piano.  The Solovox was capable
of good string and reed tones and came in three models:  J, K and L.  Organist Lenny Dee had a Solovox attached to his famous customized Hammond Model A organ, and
this can be heard on many of his early recordings.  For more information about Lenny Dee’s Model A, click here:  (Lenny Dee).

The story of the Solovox does not stop here.  It was modified and became the Solo Pedal Unit on the RT series and D-100 organs, and produced 32’ Bombarde, 32’
Bourdon, 16’, 8’, 4’, and a mixture of 2’ and 1’ combined, in addition to the normal 16’ and 8’ tones of the pedal drawbars.  It made string and reed tones available on
the pedals at pitches that were useful for the classical organist.  The principles of the Solovox were extended to introduce the first chord organ, Model S, in 1950.  The chord
organ underwent several revisions over the years.

In 1955, the models M-3, B-3, C-3 and RT-3 were introduced with Touch-Response Percussion, a single-trigger electronic system.  This means when you strike the
note a percussive sound is heard, but not if the notes are played legato.  The drawbars played at the same time; percussion was a separate voice but was borrowed from the 4’
or 2-2/3’ drawbars and channeled through the 1’ drawbar.  You could select second or third harmonic, slow or fast decay and normal or soft percussion volume.  The
Hammond Percussion made some interesting effects, especially useful in jazz and blues, but also capable of producing orchestral and unique effects.

In 1959, the A-100 was introduced and this was Hammond’s first console model that was self-contained.  It also was the first Hammond organ with its own built-in
electronic reverberation unit.

Also in 1959, Hammond came out with the Model F-100 Extravoice.  This was a one-keyboard organ with the keyboard divided into three divisions.  It had a
spinet pedalboard and unconventional stop controls.  It was aggressively marketed but not a real commercial success, and is now known as “the Edsel of the electronic organ”.

In the mid-1960s, Hammond bought out the Everett Organ Company, renowned for their reed-electric organs before World War II (they had been previously
purchased by Wurlitzer who applied Everett principles to their organs after the war).  Hammond came out with the Model 3044 as a conventional spinet in 1965, based on
Everett’s design of electronic organs; Everett had abandoned the reed system many years before.  The Hammond K-100 electronic spinet came out about the same time.

Hammond, in 1968, introduced the Phoenix, which utilized integrated circuits; this later became the N-100 series.  The Model V Cadette, built by Ace Tone of
Japan, and the Hammond Piper Autochord came out shortly thereafter.

Competition from other organ companies put much pressure on Hammond by the late 1960s as the organ was becoming very popular as a home instrument.  As
great as the tone wheel generator was, it could not produce sustain which became a paramount issue among potential organ buyers.  The tone wheels generated an AC wave
that was either off or on through the action of the keys and drawbars.  There was no way to modify this; even vibrato had to be added by a separate scanner.  Therefore, a
separate system had to be employed to produce sustain electronically, so Hammond added an extra set of keying gates and contacts under the keys.  The first model to
incorporate this was the Grand-100, a $14,000.00 church organ that you could never get in your home.  The E-100, H-100 and X-77 had a stop labeled Harp Sustain that
produced a 4’ sustained tone.  The X-66 included sustain in each percussion voice.  The problem was to have the tone wheel generator and electronic circuitry for sustain,
you would actually have two organs in one and the price would be prohibitive.  If the so-called sustain circuits could be used for the main generator, the organist could use
those stops as regular organ voices and have the sustain off.  This spelled the demise of the tone wheel generator; the last Hammond tone wheel generator organs, Models
T-500 series and H-500 series, were discontinued in 1974.

Hammond eventually had a full line of electronic organs.  All of the smaller spinets that used stop tablets were of similar design and not particularly earth shaking.
However, from medium-sized spinets through consoles, the famous Hammond drawbars, now called tone bars, were employed but electronically generated.  Many
people feel that these models do not have the true “Hammond sound”.  Second Voice Percussion on several drawbar models offers legato voices from the percussion stops,
such as Harpsichord/Violin, Piano/Diapason, etc., which may be combined with any tone bar registration.  The Philharmonic Strings include sustain for both string tones
and tone bars.  Melody Maker is a set of pre-set stops making available very close reproductions of orchestral instruments.  Excellent examples of these organs are the
Aurora Classic, Colonnade and Concorde.  Also, the Regent was Hammond’s horseshoe theatre style console.  The final step in this chapter is the Elegante, Hammond’s
flagship of the late 1970s.  Lawrence Welk featured this organ on his television show.

Today, Hammond Suzuki manufactures organs under the Hammond name utilizing digital technology.  The Hammond hallmarks are included and the tone again
sounds like the vintage Hammond we all grew to know and love.  They make numerous models from compact band organs to 3-manual church organs.  The New B-3 has
made a tremendous impact as it sounds just like its early predecessor.

Since 1935, the Hammond organ has been synonymous with true organ sound and tremendous versatility.  Indeed, many instruments from that far away time are still playing.
It’s true the tone wheel generator was over-engineered, but those instruments are still functioning in the purpose they were designed for.  The electronic models moved with the
competitive times and have brought music to many places.  Under Hammond Suzuki, the Hammond organ will continue the tradition of fine tone and prestige.