Dwight Hamilton Baldwin, a teacher of organ, piano and violin, opened a music store in Cincinnati, Ohio in 1857.  In 1862, he founded Decker Brothers Piano dealership and
hired Lucien Wulsin, who became a partner in 1873 and the company name was changed to D. H. Baldwin & Company.  Dwight Baldwin then merged the Hamilton Organ
Company, a manufacturer of reed organs, and the conglomerate became the Baldwin Piano Company.  Their first piano, an upright, was produced in 1891, and their first
grand piano in 1895.  Dwight Baldwin died in 1899 and Wulsin continued the shift of the company from retail to manufacture.  Baldwin went on to become one of the most
famous names in pianos.

In 1946, Baldwin released to market its first electronic organ, the Model 5.  This was a comprehensive 2-manual and 32-note pedalboard instrument and was mechanically
similar to a medium-sized pipe organ.  This model was found in many churches and is still a fairly common model to be found, along with its later version, the 5-A.
The Model 10 in 1950, a larger console with the same two-61-note manuals and 32 pedals, followed this.  The Model 11 followed and included such features as chiff,
celeste stops and percussions.  These organs were so successful that the company name was changed to Baldwin Piano & Organ Company.

In 1953, the Model 45 was introduced for the home market.  This organ had two 61-note manuals and 25 pedals and had 23 stops with three control levers.  This led, in
1958, to the Model 45-HP, which included sustain percussion.  In the meantime, spinet organs were developed and were commercialized as Baldwin Orga-Sonic.
Some spinet and console organs with some changes in furniture design and features appeared under the name Howard.  There were also sporadic attempts with optical-disc
technology for tone generation.

1955 saw a revival in the classic theatre organs of the 1920s, and electronic organs started to emulate them in the early 1960s and Baldwin was no exception.
Baldwin theatre organs were found as both spinets and consoles.  The HT-2 was a full-size beast including the 32-note pedalboard, followed later by the HT-2R, which
included a Rhythm Drawer featuring percussive drum sounds played on the pedals or Accompaniment manual.  A unique feature of these organs was a set of pistons
to produce the sounds of a siren or auto horn, just like the old theatre organs.

Baldwin organs were designed using the master oscillator system.  This kept production costs and prices down but there was no way to break the “electronic syndrome”
of the tone.  In answer to this, Baldwin developed Panoramic Tone consisting of a slow-speed rotor in front of a speaker with built-in spring-type reverberation.  They
also developed a series of gradual-contact key contacts to eliminate key-clicks and imitate the pipe organ’s slower attack and decay characteristics.  Organists had
mixed feelings about this slower attack and decay property.

In 1971, Baldwin’s first electro-piano was introduced.  The Fun Machine, a one-keyboard “Easy-Play” organ came out in 1974.

In 1988, Baldwin purchased the keyboard division of the Wurlitzer Company and the combined operation became known as Church Organ System, Inc.  In 1993,
this operation went belly-up.  Baldwin pianos are still being manufactured.

Thanks to Bill Miller for corrections to the text. 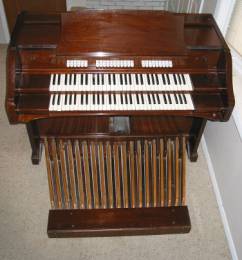 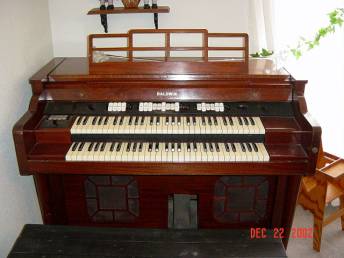 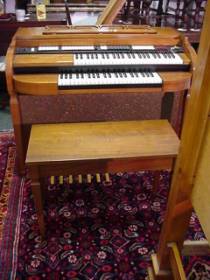 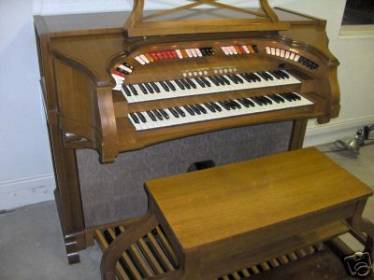