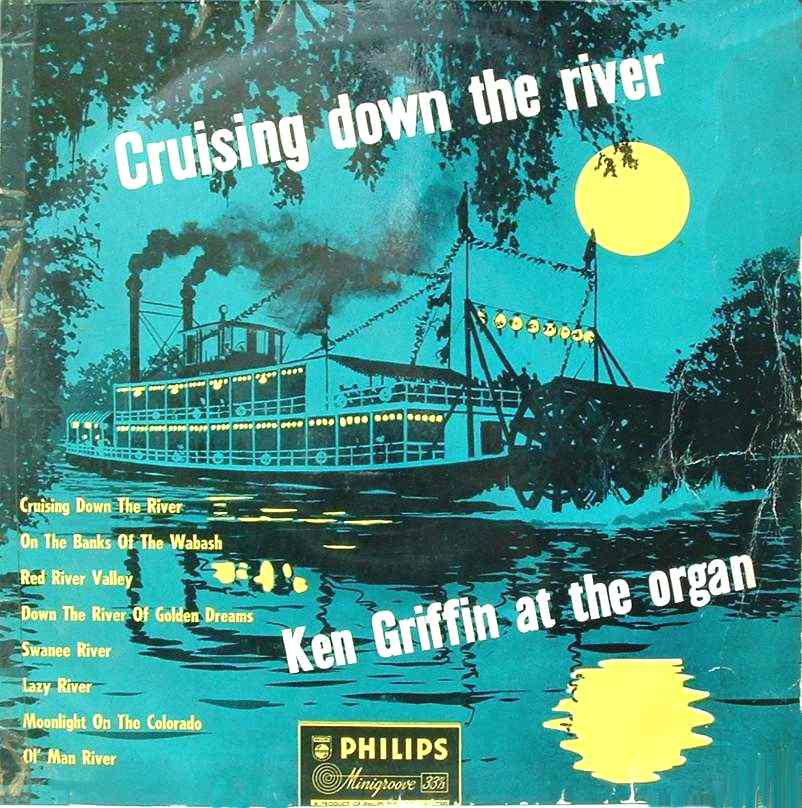 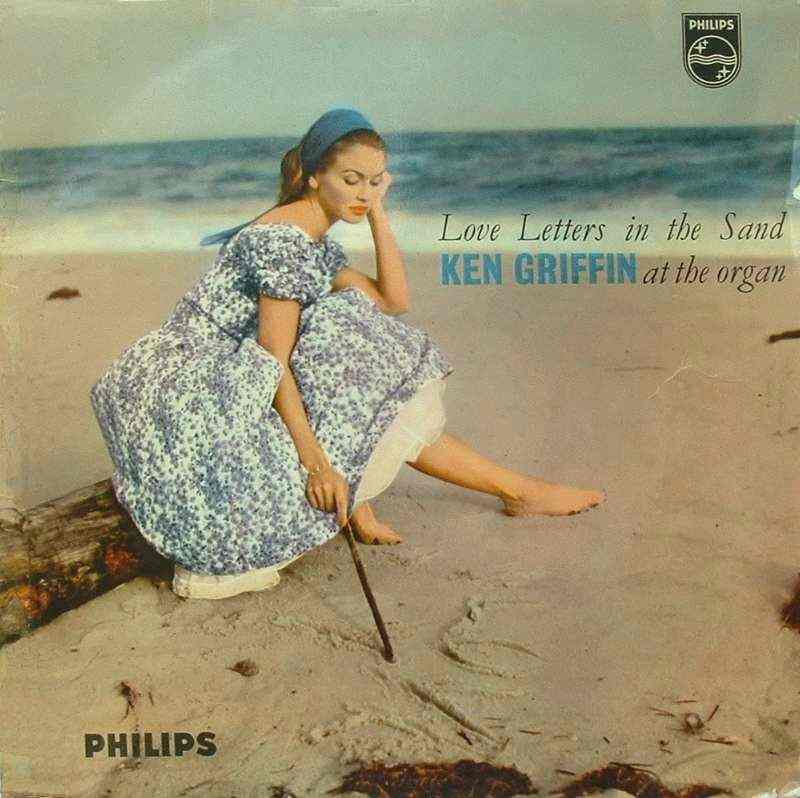 Purchased while on holiday in Dundee in 1960 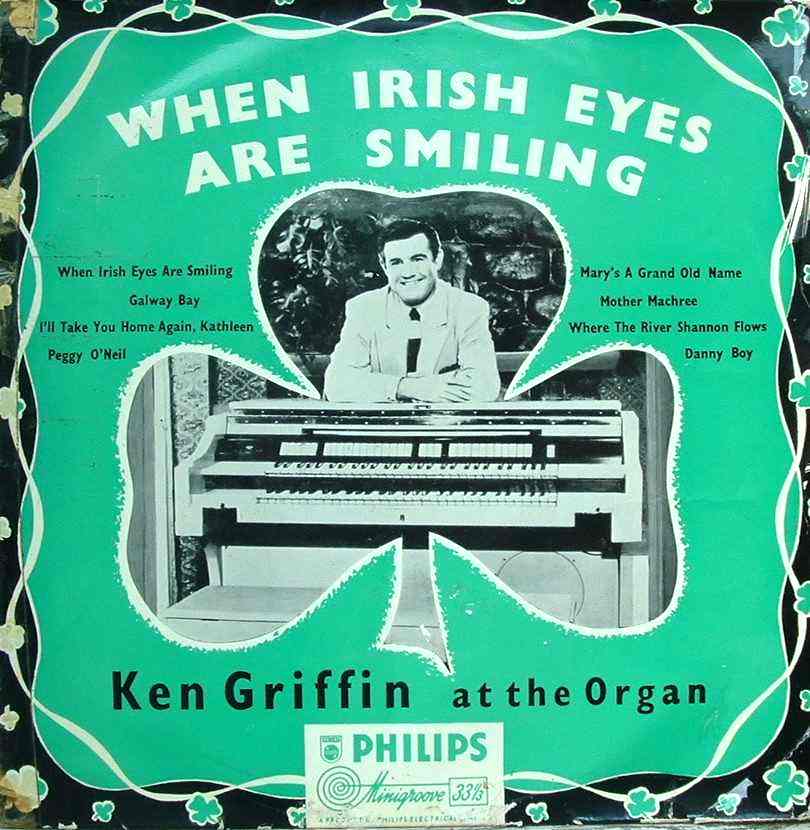 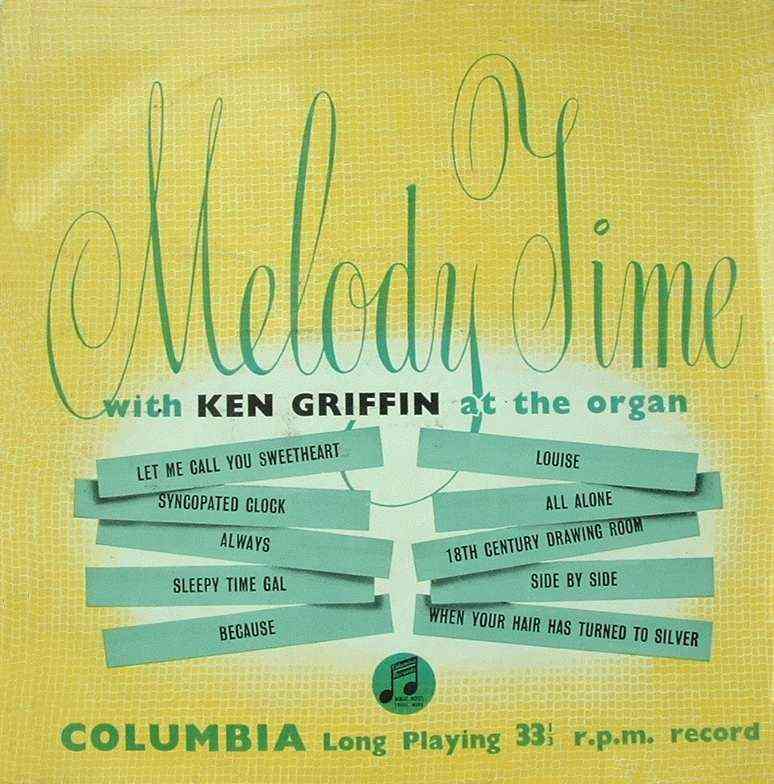 Purchased while on holiday in Dundee in 1961 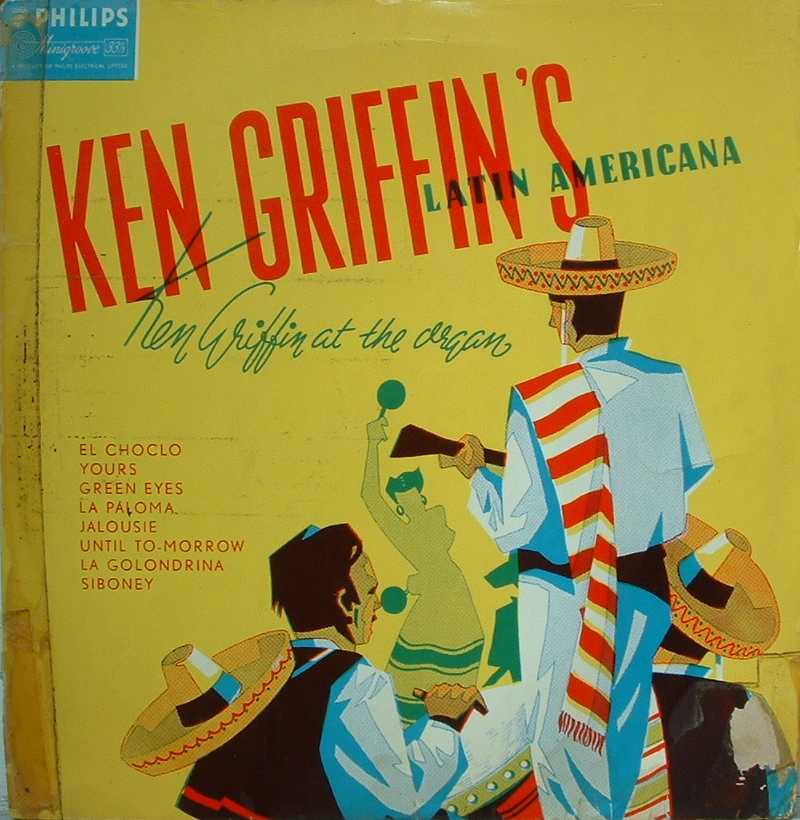 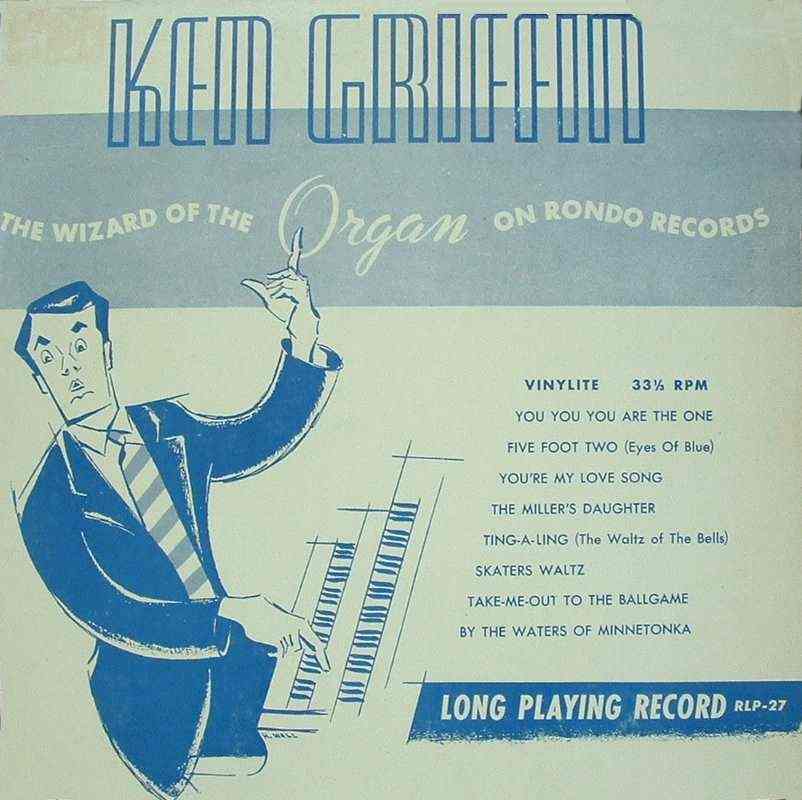 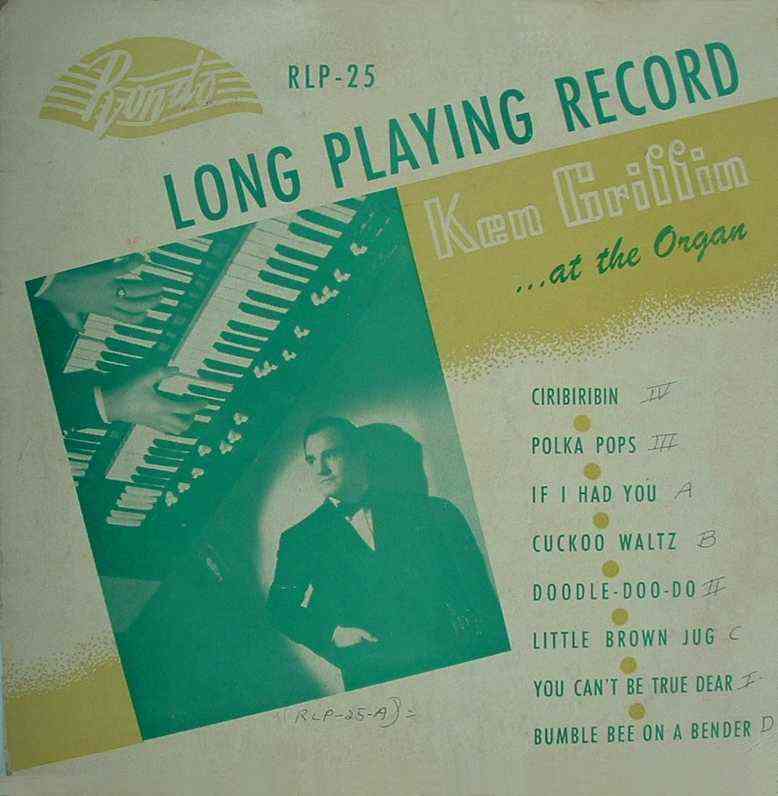 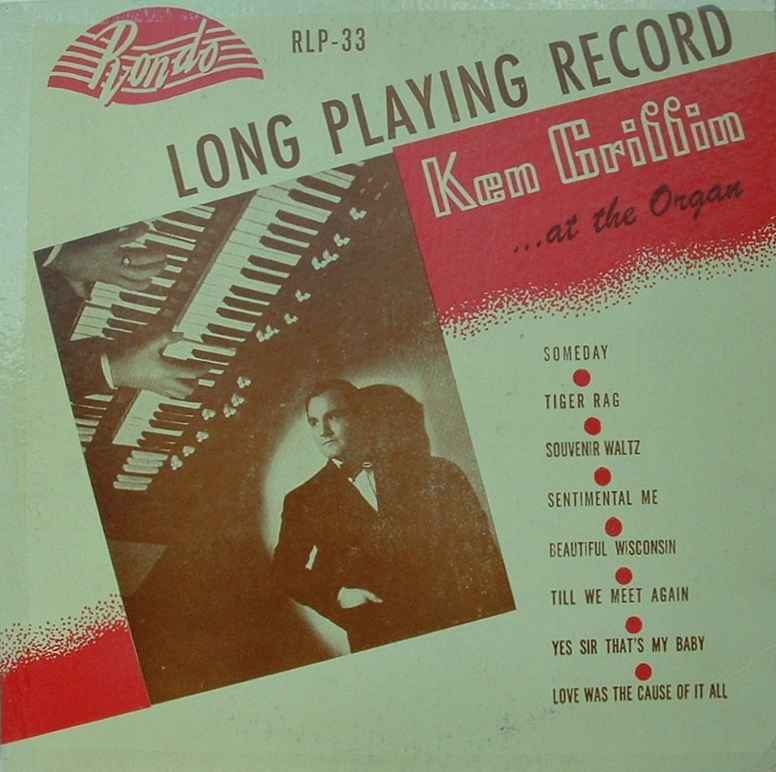 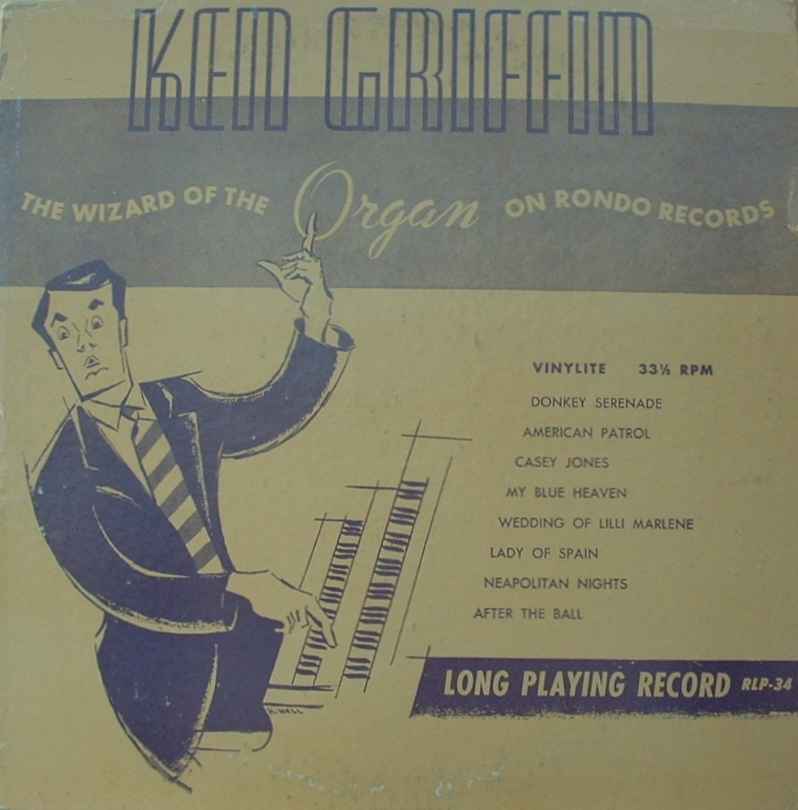 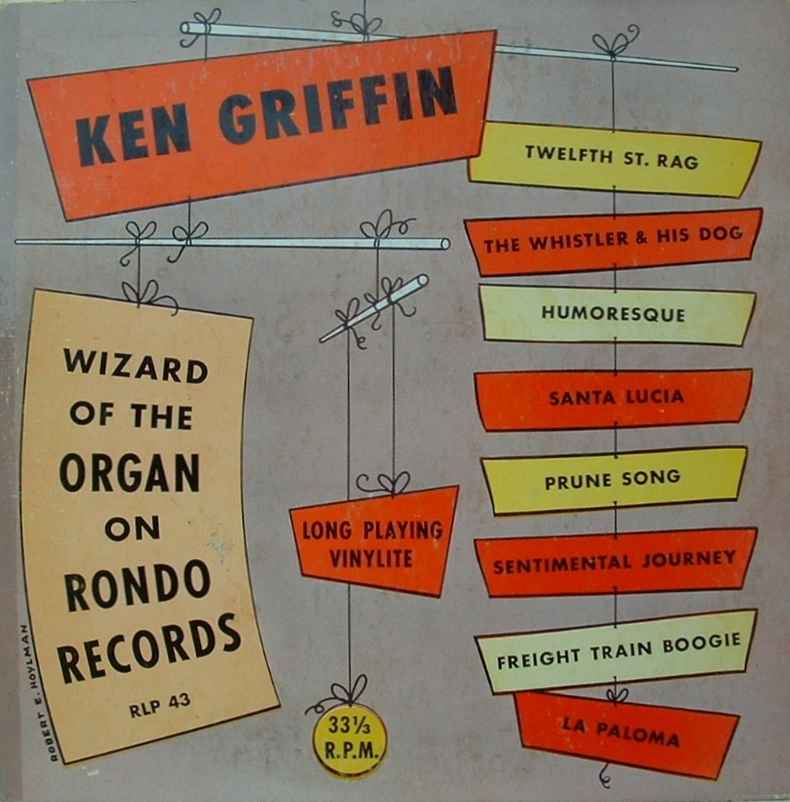 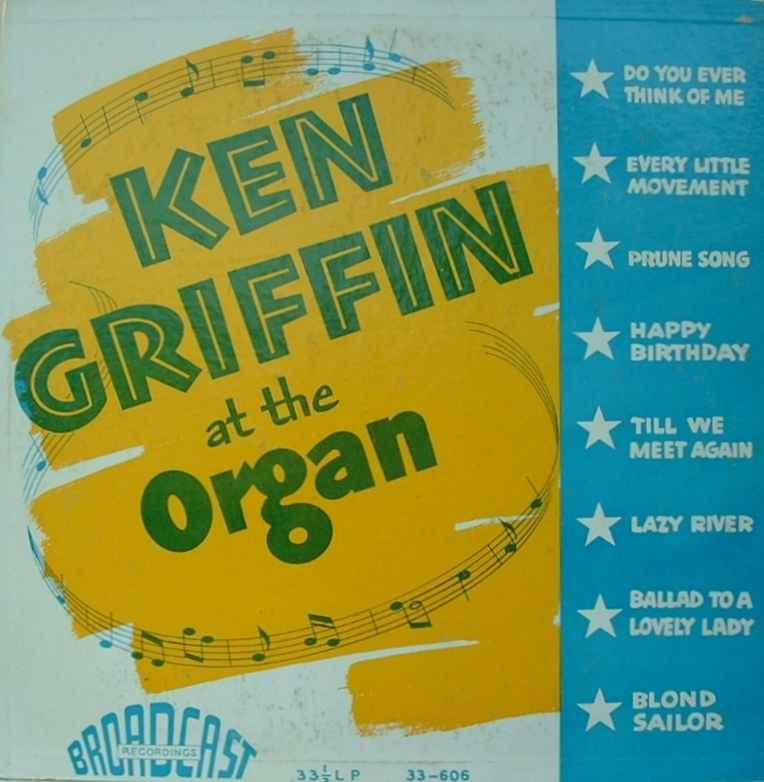 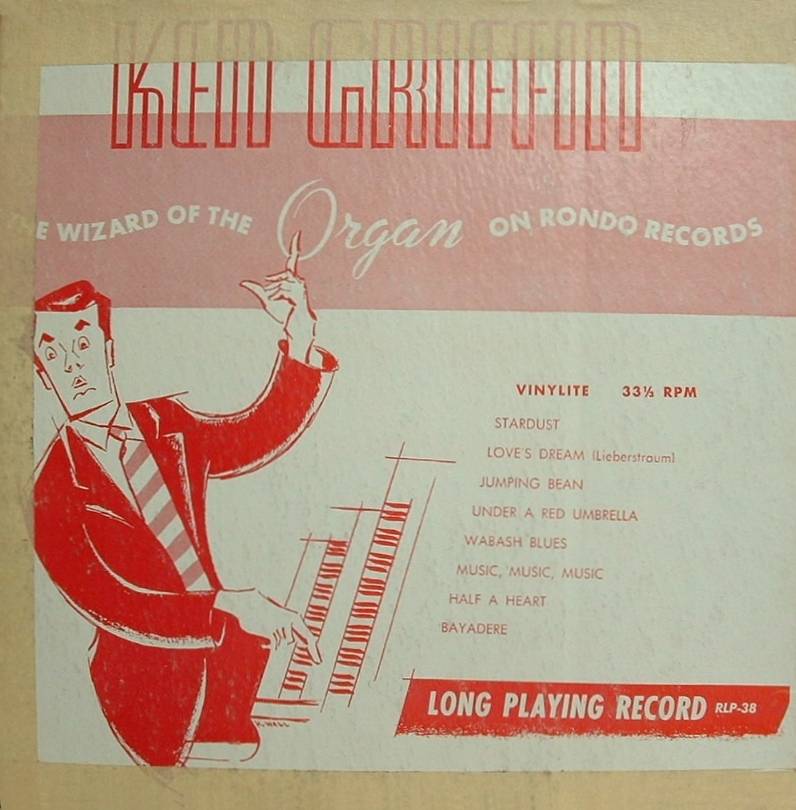 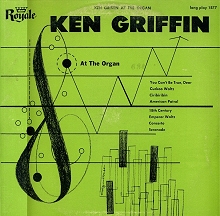 "KEN GRIFFIN"
At The Organ 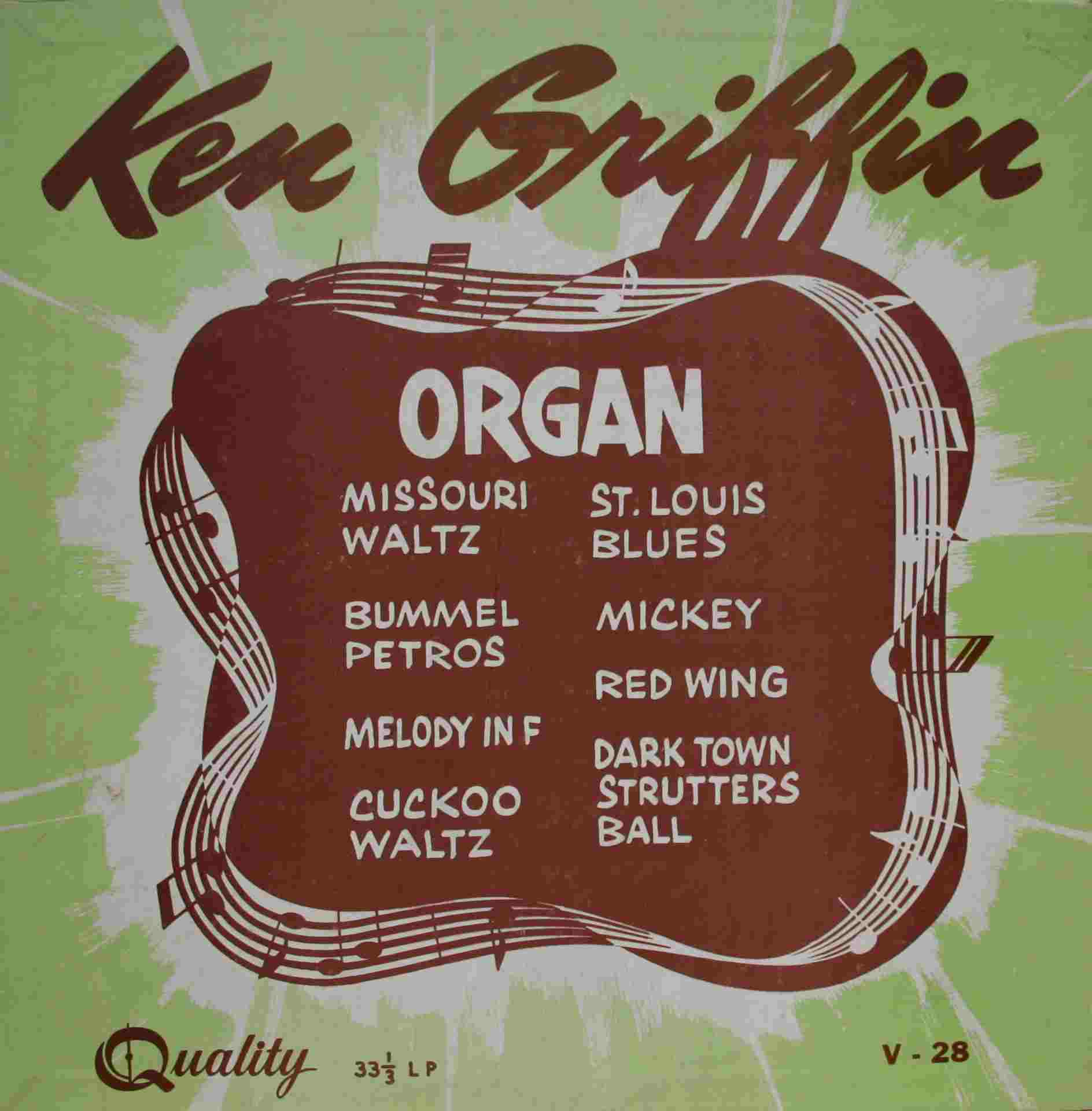 Other LP's in this 10" (pink Transparent vinylite) Rondo Series

N.B. The 12" version has since been purchased from Tim Barron (Phoenix).

COMMENTS ON FINDING THESE LATEST LP's

It was very interesting finding, and winning the last four 10" LP's (Above) on Ebay. Firstly because the records were such clean copies and hardy played, if at all. In most cases the record labels look glossy new. However, it is in the tracks that we find that Ken had made different arrangements of the same songs with whichever Label company he was with at the time and these differences open up a fascinating look at how Ken progressed and matured at the keyboard and in his arrangement and recording abilities. They are a good pointer too that if you, like myself, feel disappointed at finding a new recording but you already have most of the tunes listed, it will pay you to purchase these records as in all probability, they will be a completely different arrangement.

Sentimental Me (That 'bridge' tune start again and swings along on organ only)    ------------
Beautiful Wisconsin (Sweet but not as driving as Beautiful Ohio, Nice bell-like sound affect in
background)
Till We Meet Again (A great version of Doris Day's great number)
Yes Sir That's My Baby (As Eric would say its a "Wowser". Really swings. Great use of the deep
Hammond sound)
Love Was The Cause Of It All (Easy going in the same vein as Ballad to a Lovely Lady)

Rondo RLP 34
Donkey Serenade (A great version by Ken. Fine playing)                ---
American Patrol (A very patriotic arrangement)                    ---
Casey Jones (A classical Ken train arrangement. Very Fast paced)           -----------
My Blue Heaven (This swings along with a great mix of organ and piano)         ------------
Wedding Of Lilli Marlene (One I have never heard before and was fascinated by it's title and reference to the well known tune 'Lili Marlene'. There are similarities and this very pleasant tune is played in Ken's lilting
style that makes you want to whistle along. A Great skating number.
Lady Of Spain (Ken starts off with his Latin American beat then manages to make it sound as if there is a
whole Combo playing)
Neapolitan Nights (A delicate night-spot number with use of a concertina or melodeon and on which Ken uses his 'bell' just briefly enough to compliment the melody)
After The Ball (A delicate waltz arrangement, again using a melodeon or concertina to nice affect)

Rondo RLP 43
Twelfth Street Rag (The third arrangement of this number that I have come across and what a 'blinder'!  Ken's fingers just fly over the keys. This one will test Eric's 'keyboard crunchin' abilities)                 ---
The Whistler And His Dog (A completely new recording to me and as above Ken dances over the keys in a near perfect arrangement. Nice use of the 'whistling' sound that makes you feel like whistling along.
Humouresque (Another, third arrangement of this well known 'classical' tune in which Ken starts off in the correct speed and manner as it was originally composed  but by the second verse Ken goes into his well known 'swing' and you find your feet starting to tap along)             -----------
Santa Lucia (A very competent arrangement with Ken's lilt and nice use of the 'bell' sound. A good steady
beat, concluding with Ken's well known bridging arrangement)                 ------------
Sentimental Journey (A different arrangement from his Columbia recording. Same swinging style with the train whistle coming in on the beat but Ken concludes with a completely different steam train beat, rather shorter than in the later arrangement)
Prune Song ( This Rondo version is a catchy arrangement in which Ken keeps the pace up throughout and
just slows down for the final moments)
La Paloma (Very Close to his Columbia arrangement on 'Latin Americana' but with subtle differences)
Freight Train Boogie (Again, a different arrangement than on his Columbia  'Sugar & Spice' LP. However it was interesting to find that this is in fact the second un-named tune that Ken plays with Sonny dancing on the 67 Melody Lane TV Show and where we can see Ken actually play in that very fast style where he flicks
the keys at a fantastic rate)

Broadcast 606
Do You Ever Think Of Me (Another smoothie in the style of Ballad of a Lovely Lady) Lady style)---
Every Little Movement   (A nice upbeat version compared to the Rondo recording)      ---
Prune Song   (Jolly little number with a faster beat to the Rondo version)               -----------
Happy Birthday (Another new track to me. In the same 'fun' manner as Ken's 'My Life's Story. He most likely played this at most of his shows for anyone with a birthday that day')          ------------
Till We Meet Again (A great arrangement of Doris Day's hit number, with a nice version of his bridging
tune in the middle)
Lazy River (Quite different to his better known Columbia arrangement. Slower with a definite swing beat)
Ballad To A Lovely Lady (A lovely melody, sweetly played)
Blond Sailor (A different arrangement to that on the 'Sparkling Touch' LP. Slightly more upbeat but with less trimmings)

Rondo 38
Stardust (This is a lovely little number with a very lilting swing but played with great respect for the number)
Loves Dream (Lieberstraume) (A swinging arrangement of this fine old classic)
Jumping Bean (Otherwise known as Jukebox Polka. Ken's own composition and played very fast)
Under A Red Umbrella (Semifast catchy little number, shows it's age a bit)
Wabash Blues (This is another 'Classic' by Ken that goes with his Griffin Blues and Apple Blossom
Wedding. Really sets your feet tapping)
Music, Music, Music (Slightly raunchy but bouncy rhythm, again on the 'early' organ sound)
Half A Heart (Whistle, and tap your foot to this catchy little number)
Bayadare (Sounds like a background tune to a silent movie, such as Chaplin! Very solid and impressive
arrangement)

Broadcast V-28
Missouri Waltz (B) (That upset the traditionalists! Nice piano & organ mix)
Bummel Petros  (a great foot-tapping marching tune)
Melody in F (B) (A really nice, serious attempt by Ken to play this fine classical piece in it's proper style)
Cuckoo Waltz (B) Slightly tame arrangment, not as lively as Ken's later arrangements.
St. Louis Blues (B) (Subtably different from his CD version. Great. Try sitting still when listening this one)
Mickey (B) (Different and very pleasant, very Ken Griffin)
Redwing (B) (An old favourite, easy going. I seem to recall it being called Beautiful Little Redwing)
Darktown Strutters Ball (B) (A real swinging/boogie number as only Ken could play it).