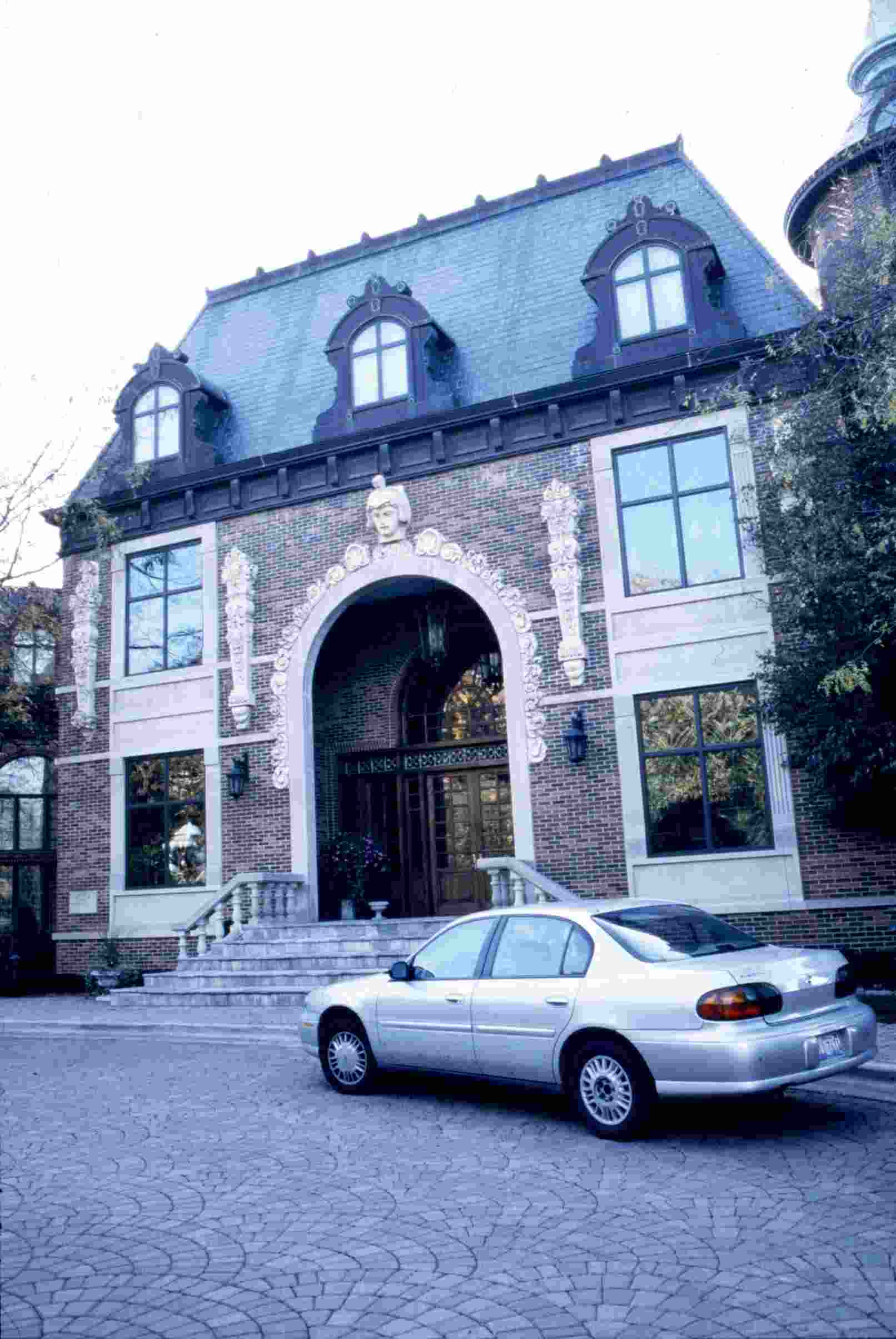 On Friday the 20th of October 20003, Andy Antonczyk kindly arranged for his father, Ray,  Frank Pugno, Eric Larson and myself to visit this magnificent estate. It is the home of more
massive musical instruments, mainline Locomotives, Fun Fair organs and Carousel collection than you will ever see and far too many items to remember. You just have to go with the
flow and take in as much as possible and hope you remember at least half of it! It is set in the most attractive area, where the scenery takes on a much more open and hillier appearance
than you experience in and around Chicago. The house is set by a lake and wooded area with a majestic fountain in the front. I should quickly add that you can only visit by invitation,
which makes me appreciate Andy's friendship all the more.

We were introduced to Jasper Sanfilippo who is very much a hands-on owner and gets his hands dirty mucking in with the building and restoration work. I was also introduced to
Robert Ridgeway who is the curator and in charge of much of the restoration work and especially the mighty Wurlitzer. Robert takes great delight on showing and explaining the work.

The drive along the private road is fine and as you approach the house you find a length of standard gauge railway track and a large Victorian style clock which just has to be railway
orientated. A classical Western type steam locomotive, purchased from the Henry Ford Museum in Detroit is being preserved to run with an equally grand passenger coach and Caboose,
in the near future. The centre piece in this section is the massive Fun Fair 'Eden Palais' facade which is a glorious sight. Preserved to a standard that is quite unbelievable. The
craftsmanship is of the highest standards with a team who are keeping the old trades of applying gold leaf, beveled mirrors and high gloss paint work alive. The fact that this massive
construction, which would have been the main eye catcher to bring people to the fair, sits in the centre of this massive room, with space all around and on either side to display a full sized
steam locomotive, Preserved passenger Coach and dozens of steam and pipe organs shows the scale of this building. Not to forget the full sized carousel behind the facade, where the
horses actually appear to race each other as one moves ahead or behind another as the carousel turns.

You enter the house by a grand stairway and high doors and are met with a view that no-one has seen since the loss of the Titanic. The grand staircase is designed on the main staircase of
the Titanic and is quite breathtaking and awesome. At the top of the staircase which then splits in stairways leading to the upper floors to the right and left, stands a magnificent Imhof &
Mukle barrel-operated orchestration which gleams from the reflection of the beautiful crystal chandelier which towers over it. Two grand, crowned' pillars stand proudly to each side of
the stairway.

The ceiling of this Grand Foyer is a magnificent stained glass skylight that is impossible to describe and when fully lighted glows with the power of 12,000 watts. 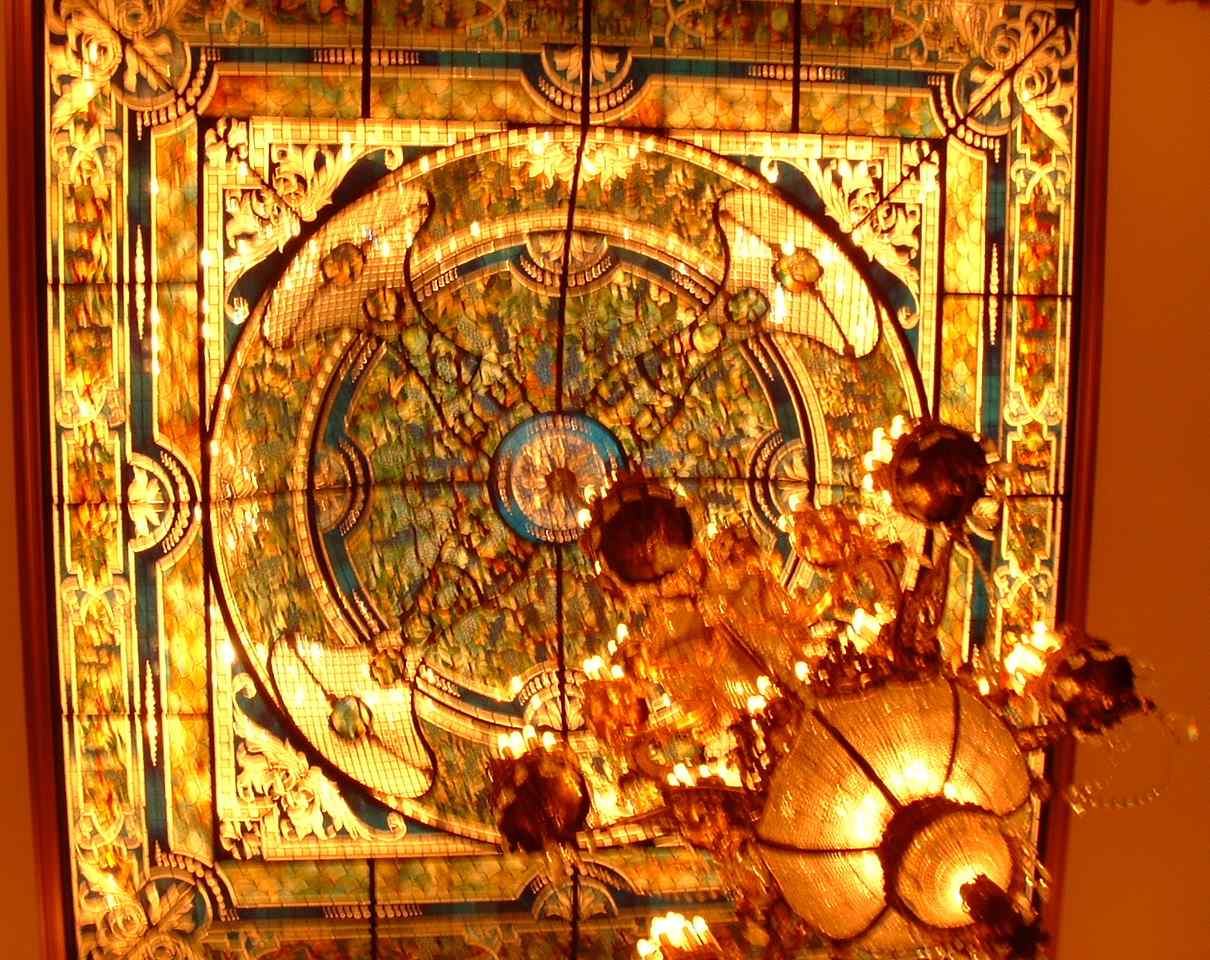 Sadly, this grabbed and handheld shot is a little fuzzy and doesn't do the ceiling
justice but I hope it gives you a fair idea of what it looks like when fully lit.
The chandelier seen is a good 14ft from top to bottom. If you use this to
scale the size of the ceiling you will note how large this whole structure is.

Something to remember while viewing this grand estate is that virtually everything came from somewhere else and brought together in the building of the house and collections AND,
everything works, being preserved to the highest standards, but even more enjoyable is that everything (well almost) is hands-on and you can operate virtually all of the music machines
you come across.

The music room is quite something! The scale enormous with the 14ft chandeliers hardly looking their size, so well do they fit into the scale of the building. The main feature is the
largest Wurlitzer Theatre Organ, in the World. five manuals which control 80 ranks of pipes, with sound effects in every room. As you walk around you will come across pipes of all
sizes dotted around, both in the lower level and up in the grand balcony. The crowing glory are the set of Trumpet pipes at the highest level and at the back of the balcony, which have
to be heard to be believed. The main pipes are all contained in special chambers at the back of the Wurlitzer and the high curtains. I shan't try to describe everything as only a
personal visit or good photographs could do justice, but I will try to do what I can to relay the experience that I found during my visit.

As if this first floor level wasn't enough there is a grand staircase that takes you downstairs or you can use the magnificent glass lift that takes you to all three levels. A magnificent view
of the three levels are seen looking from the bottom of the stair way as the fine wooden banisters and gold railing insets and deep pile gray/blue carpet bring your eyes to the first floor
level with the Wurlitzer as a centre piece and looking up to the gallery with the delicate arches which have hundreds of light bulbs highlighting them. This is an eye popping sight. 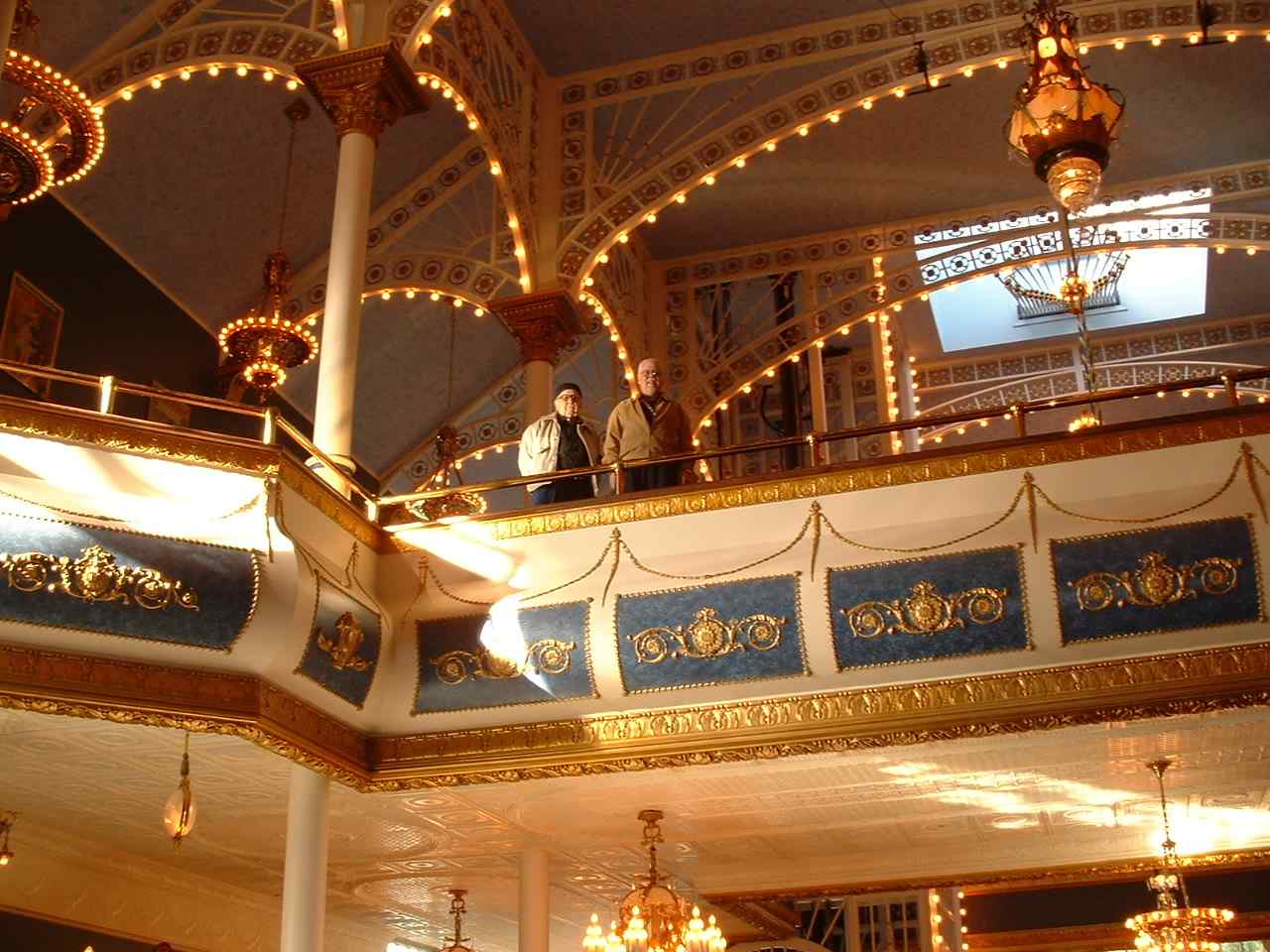 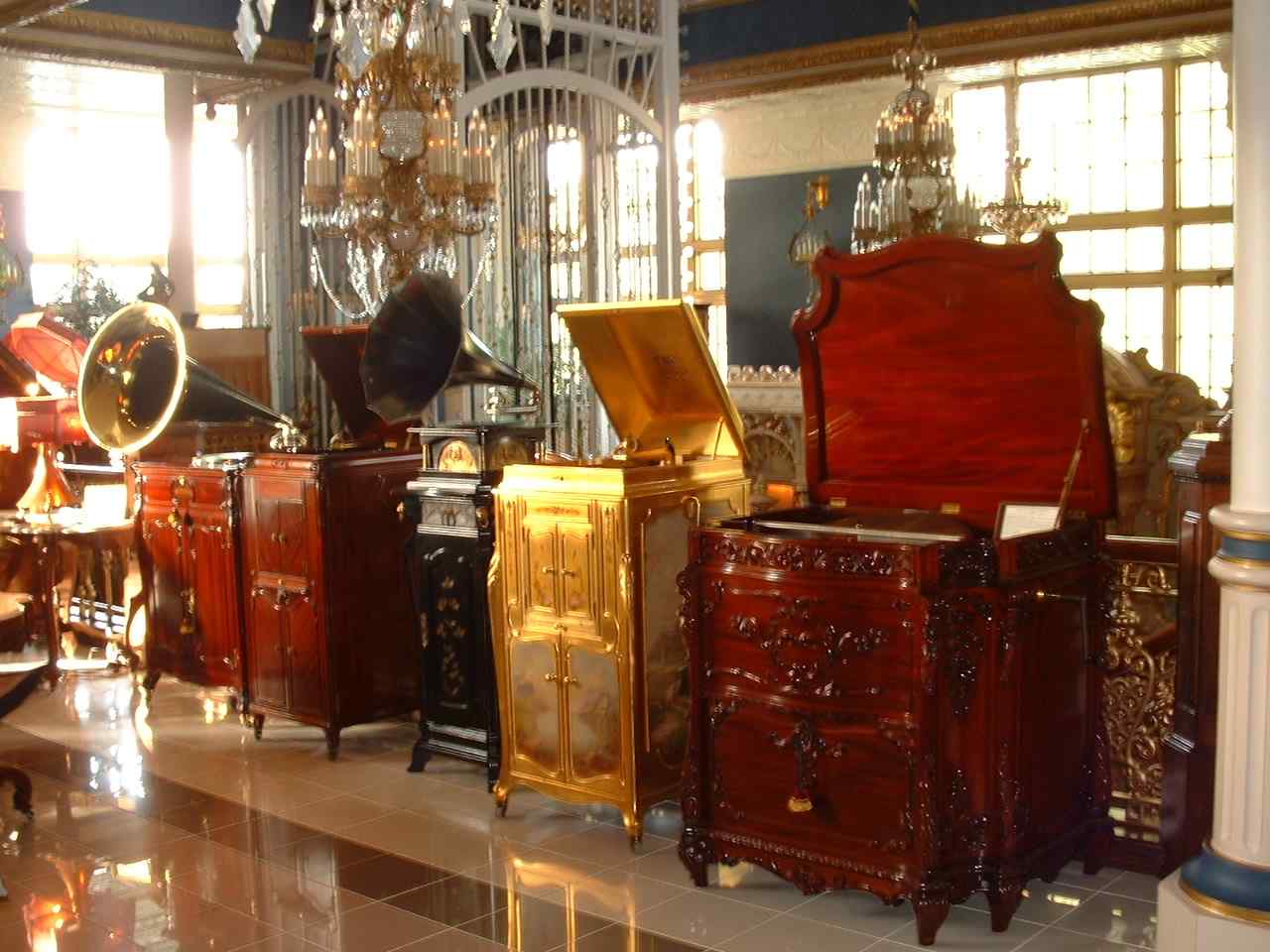 My introduction to the knowledge of this estate was a little over a year back when Frank Pugno sent me a video of an organ show he performed there, during one of the many events that the
estate puts on during the year. Seeing and hearing Frank play on the magnificent Wurlitzer was grand enough but the building itself amazed me and I couldn't believe that I was actually there,
and even then it is so huge and grand it still impressed  me to the point of speechless (that's quite something for me, some would say)!  But I am sure you would find yourself in the same
way very soon after arriving here.

My introduction to the knowledge of this estate was a little over a year back when Frank Pugno sent me a video of an organ show he did there, during one of the many events that the estate
puts on during the year. Seeing and hearing Frank play on the magnificent Wurlitzer was grand enough but the building itself amazed me and I couldn't believe that I was actually there, and
even then it is so huge and grand it still impressed  me to the point of speechless (that's quite something for me, some would say)!  But I am sure you would find yourself in the same way
very soon after arriving here. 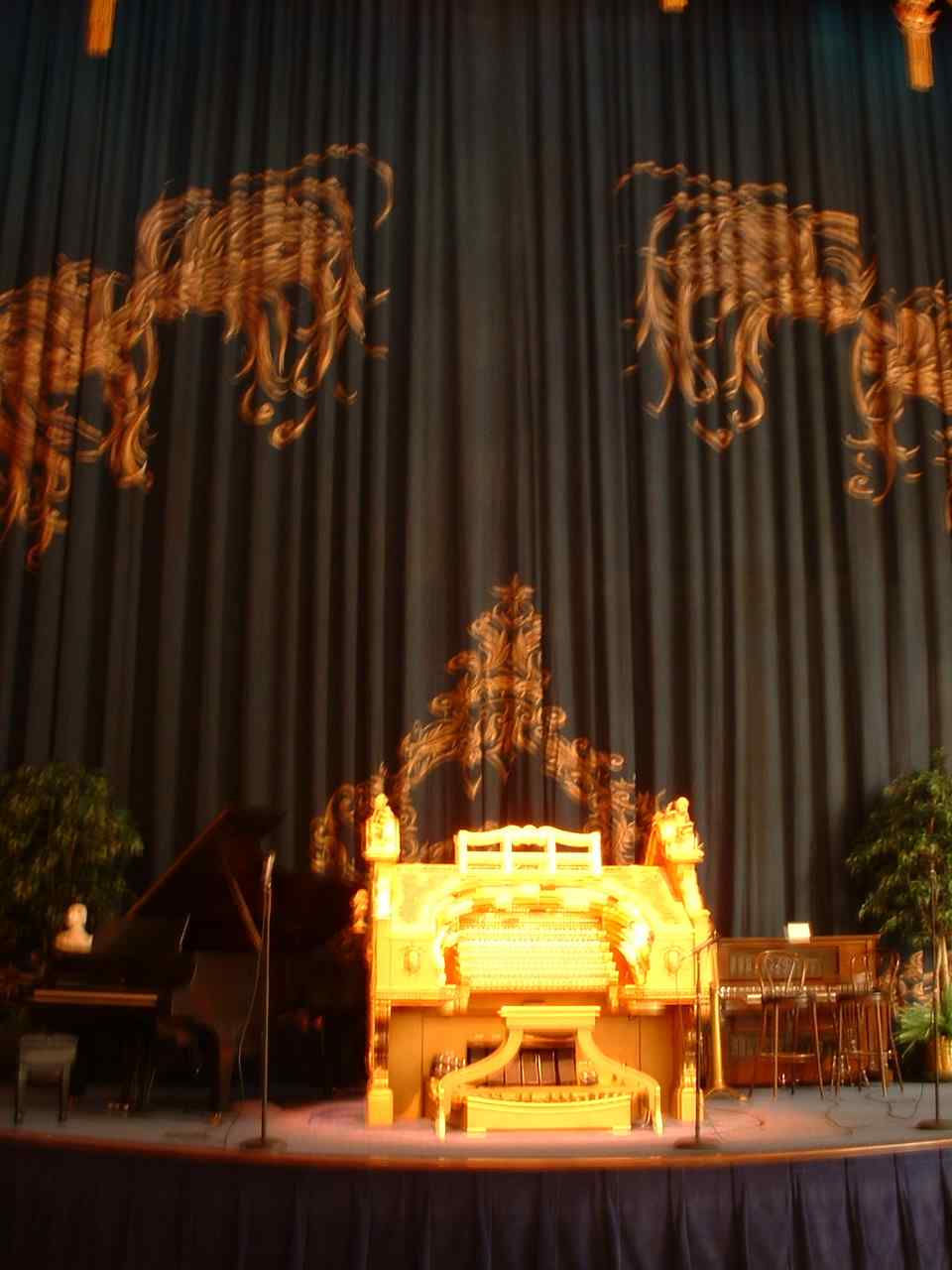 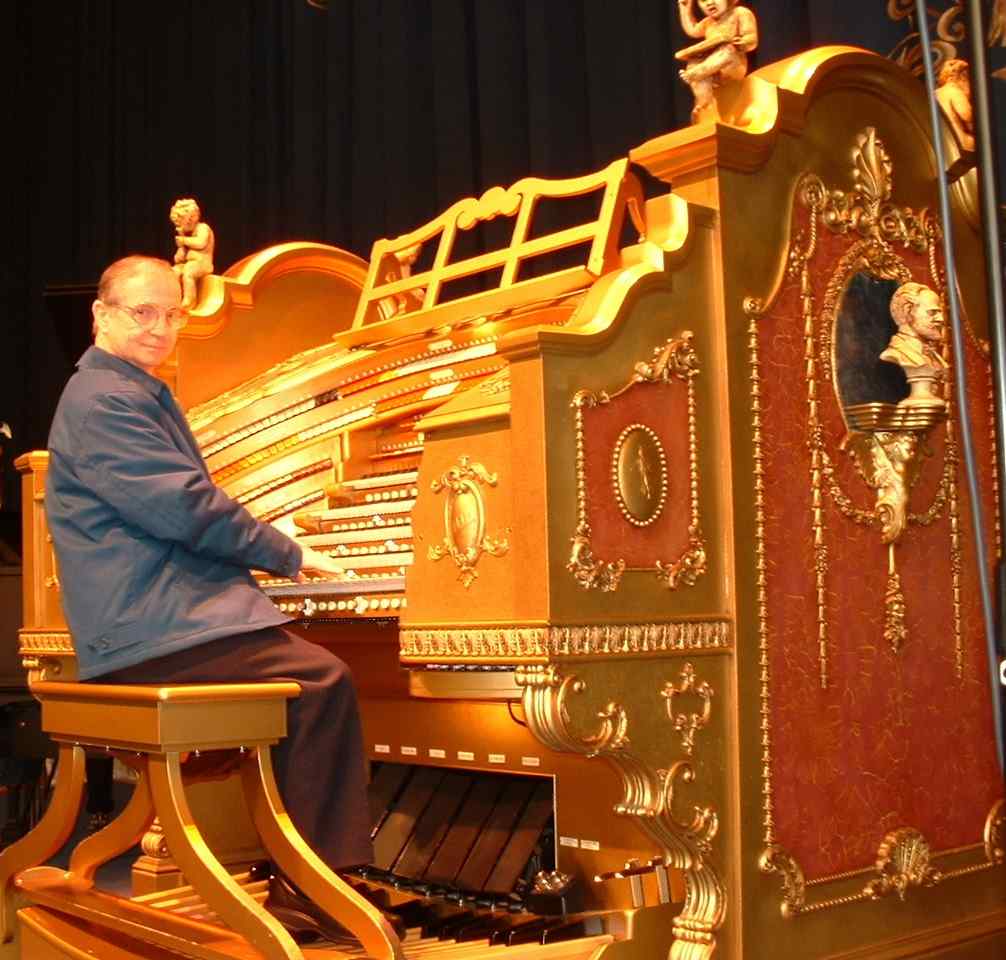 Along with these performances Robert also played a number of performances using the Trousdale Digital Player by some of the great organists who have played there over the years, such
as Lyn Larsen and Tom Hazleton. All around the music room are microphones placed strategically to get the best recordings levels, so that audio recordings can be created of the live
programmes. They also produce their own CD's from these recordings. 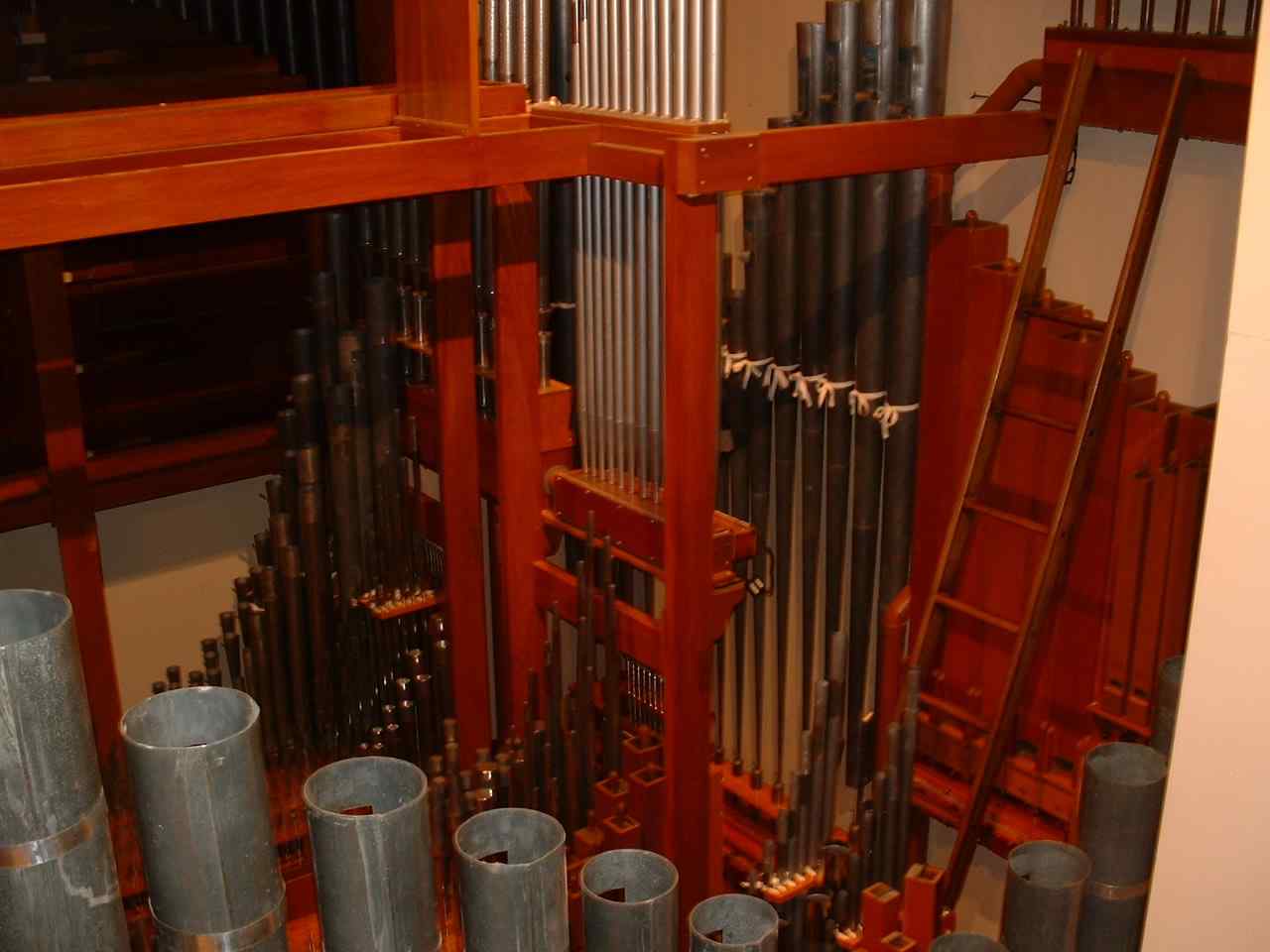 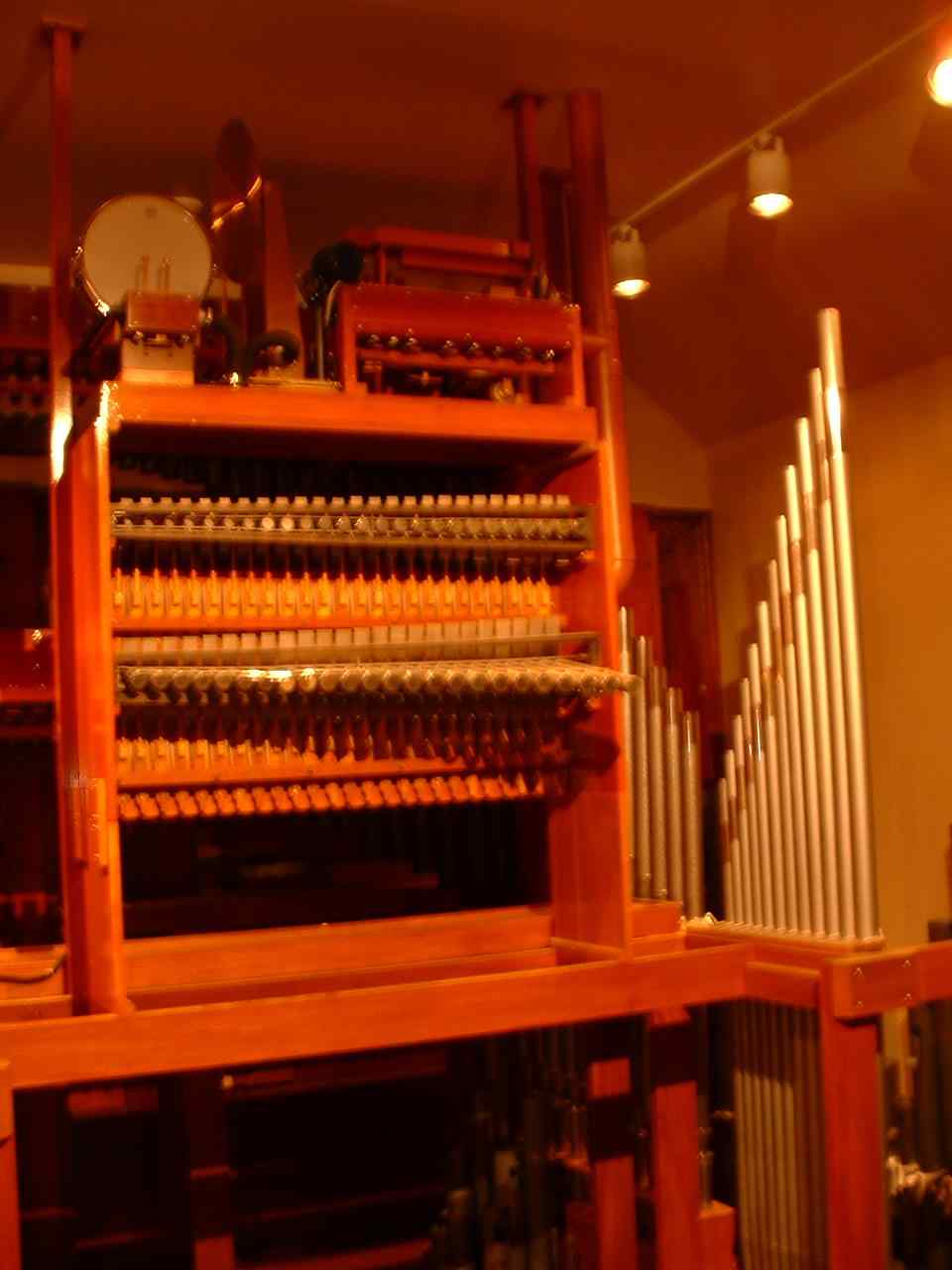 While looking around the pipe chambers Robert struck the keys of the pipes and instruments in that chamber to give us a close-up example of how they sounded, which was very interesting
indeed as you could watch the hammers strike, the bells & cymbals clang etc.

Robert next invited us to go up to the gallery and he gave us a full blown demonstration of what this great organ is about by playing various organists via the Trousdale Digital Playback
system. The organists portrayed were Tom Hazleton, Simon Gledhill,  Jonas  Nordwall, and Lyn Larsen and the power of the pipes, which made your bones vibrate.

The final tour was of the basement level. The first thing that greets you is the fine full sized Victorian Bar and Ice Cream Parlour, which is used on special occasions. All around are music
machines, player organs, Peep-Shows, or 'What the Butler Saw' as we in the UK called them. Just so much to take in and remember. Only a number of visits to this fine home and collection
could ever reach that stage.

Outside Robert took us through the work shops and present restoration work, also the many pieces of equipment (by the ton) dotted around the grounds that, maybe, one day, will finish up
in perfect preservation  and made part of the collection. 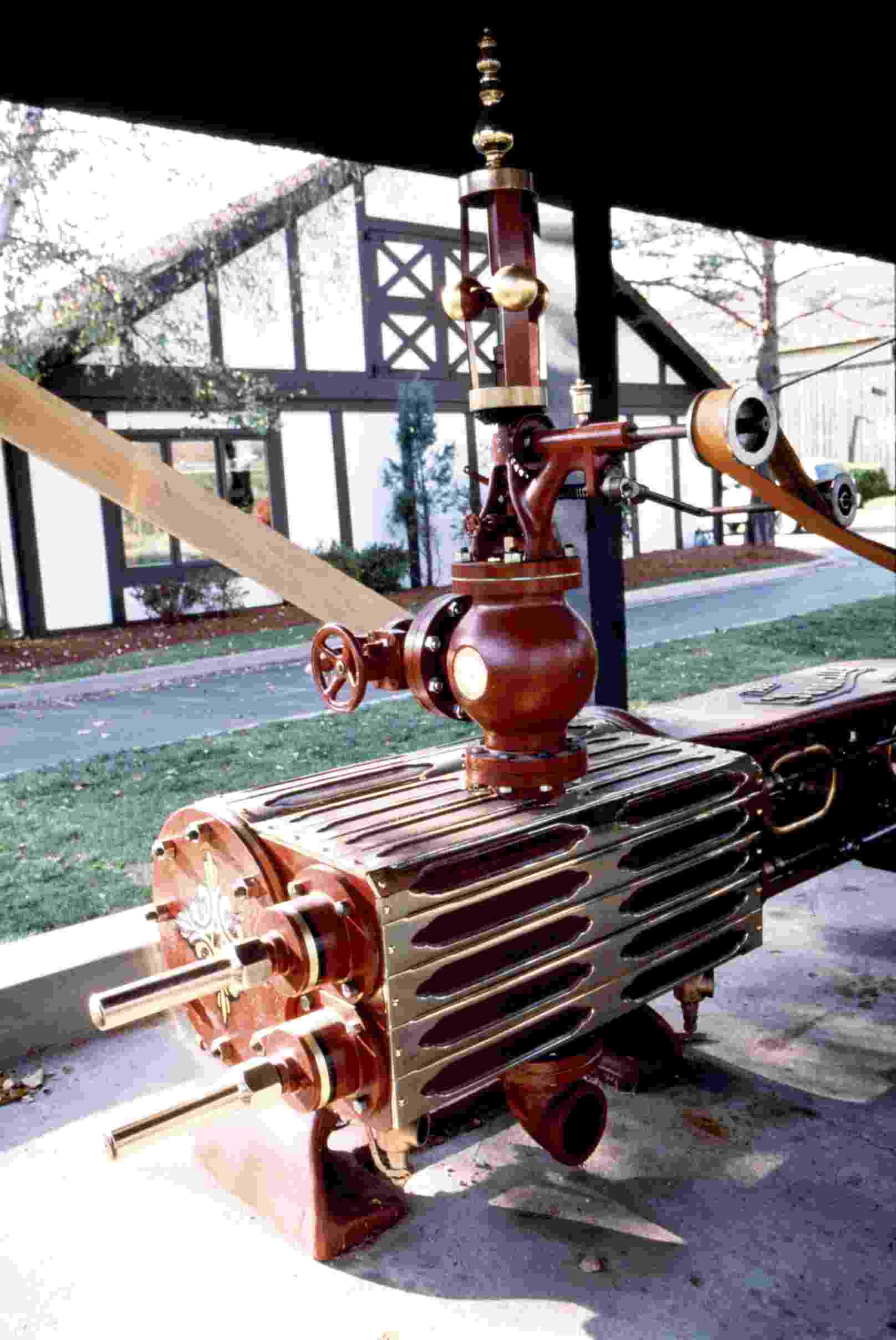 To end an already very enjoyable day, Robert directed us to a local restaurant where we all enjoyed a good meal and more chat before we said goodbye and drove back into Chicago.

As a keepsake I purchased a CD by Lyn Larsen and also the colourful brochure giving information about the estate.

My thanks to Andy for taking me to this fine house and museum and to Robert for being such a great host.

The John B. Sanfilippo Company are the makers of  food production under the Fisher Evons, Flavour Tree, Sunshine Country and Texas brands. Covering 70 private label brands.

Three web pages you can go to and find out more about this grand house and collection: