Edward G. Thomas founded the Thomas Organ Company in 1875.  Their first instruments were pipe organs and they later manufactured reed organs as well.
Thomas George invented the Thomas electronic organ after having been involved with previous organ developments.  In 1956, with the financial backing of Joe
Benaron, he reorganized the Thomas Organ Company, headquartered in Sepulveda, California.  Joe Benaron was the president of the company for many years.

The first Thomas organs had one manual and about ten stops.  These stops were dial controls and operated just like the volume control on a television set.
One model of this type was the Talking Organ and had a built-in phonograph, which used records for lessons and was called the “Built-In Teacher”.
These early models used a shared-generator system, which utilized one generator for every two adjacent notes.  Soon, this clumsy system was abandoned
and Thomas went to master oscillators.  Two-manual and pedal models with a larger number of stop dials were introduced and the dials eventually gave way
to conventional stops with a minimum of dials for less important functions, that is, vibrato depth and speed, pedal volume, repeat percussion speed and manual
balance.

The organs of the 1950s were huge monstrosities and the public loved massive furniture then.  Thomas was built as a home organ, and indeed, this was their
largest market.  They were the first to develop the “streamlined” console, which was more attractive for home use.

Thomas went to transistors in a hurry.  Because of the room inside the console this saved, more features were developed that put Thomas into a position
of eminence.  They introduced several features that became standard in the industry.  The most important of these was Repeat Percussion, which could be
played from either or both manuals.  This had great appeal to the organ customer as now one could produce the sounds of a banjo, marimba, mandolin and a
host of others automatically.  This made its way into all other home and entertainment organs.  Another famous feature was Vibra-Magic.  When this stop was
activated, vibrato was withheld on short notes, but when a note was held longer, vibrato was added gradually to whatever vibrato setting the organist selected.
It bore an uncanny resemblance to a violin being played.  Other companies followed with Delayed Vibrato.  In today’s modern instruments, it is built directly
into the stops and is no longer available on a separate control.  Thomas also included a trigger-attack percussion and a sustain system for virtually any
percussion effect.  The built-in Leslie speaker added great richness and depth to the tinny, poorly filtered sounds of the organ.

A unique feature of the Thomas spinets was their 13-note pedalboard, which was arced inward to simulate console pedals.  They were too small for heel
and toe playing and they were only one octave.  The Concert Serenade and the Lawrence Welk had two 44-note manuals and 25 short pedals.  The VL-5 had
the same spinet manuals with a 25-note pedalboard that went under the bench as a console does.  The Model 800 Celebrity had two 61-note manuals
and a 32-note, flat “Princess (narrow)” pedalboard, but that was later revised to a standard 25-note pedalboard.  Their only other 32-note pedalboard organs
were the Impresario theatre model, the Model 710 church organ and the Model 900 Palace three-manual theatre organ.  These three organs had pedalboards
that conformed to A.G.O. specifications.

There was one area of the market that Thomas cornered.  They made a successful line of small, inexpensive spinets perfectly geared for home use.  The
manuals had 37-notes and there were 13 pedals with about a dozen stops and a few dial controls.  These “baby” organs had attack percussion, repeat and a
Leslie speaker.  Not a bad deal for $500.00 in the 1960s!  These organs were found in homes and apartments and purchased by parents who wanted to see if
the children were interested in playing it.  If they were, a trade-in for a better instrument could be made and if there was no interest, not much money was lost.

Heathkit in Michigan manufactured several smaller models of the Thomas organ in kit form.  These proved very popular as the price was lower because the
customer assembled it himself.  Thomas also manufactured organs for Sears, Roebuck & Co. under the name Silvertone and you could buy them at any Sears
store.

In the 1960s, the Thomas Organ Company was the importer of Vox combo organs from Italy.  This brand of instrument was used by many rock and roll
groups,  most notably, the Beatles.  The Vox Continental was a very popular model.  The Thomas Organ Company bought the manufacture rights to the
Moog synthesizer.  Professional entertainers bought many of these.  Thomas produced an organ using the Moog name utilizing the synthesizer.  They
also produced Thomas Organ Model 370 Monticello, which was a standard spinet and included a built-in synthesizer incorporated into the upper manual with
its own division of stops.

Lawrence Welk and Bob Ralston used the Thomas organ on television and recordings for years.  Celebrities endorsed it as well.  I remember an episode of
The Lucy Show featuring one.

The Thomas organ was manufactured with an abundance of features.  Many households owned them and they were fun to play.  The tone was not acceptable
to professionals but the features kept the general public buying them.  The instruments were cheaply built and I do not recommend buying an old Thomas
organ today (This statement does not apply to the organs being built by the current Thomas Organ Company.).  In the mid 1960s, the tone was improved.

In 1979, Thomas Organ Company was one of the first big organ companies to go out of business.  It vanished as a corporate entity.  In 1997, the Thomas
Organ Company was again reorganized using digital technology, with Bob Ralston on the Board of Directors.  Their modern instruments are worthy of note.
Their sound is excellent with a wide variety of models to choose from. 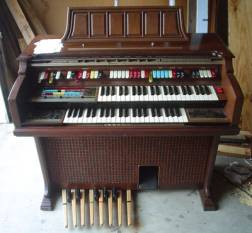 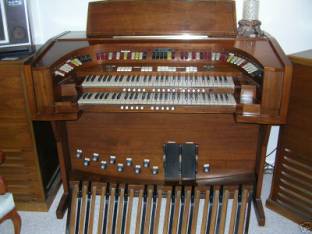 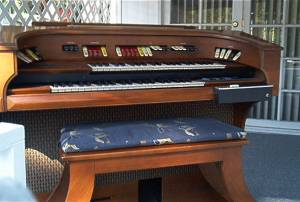 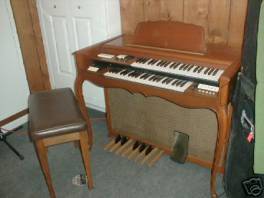 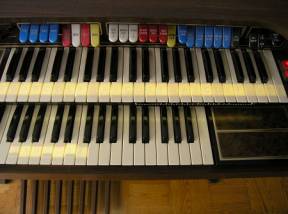