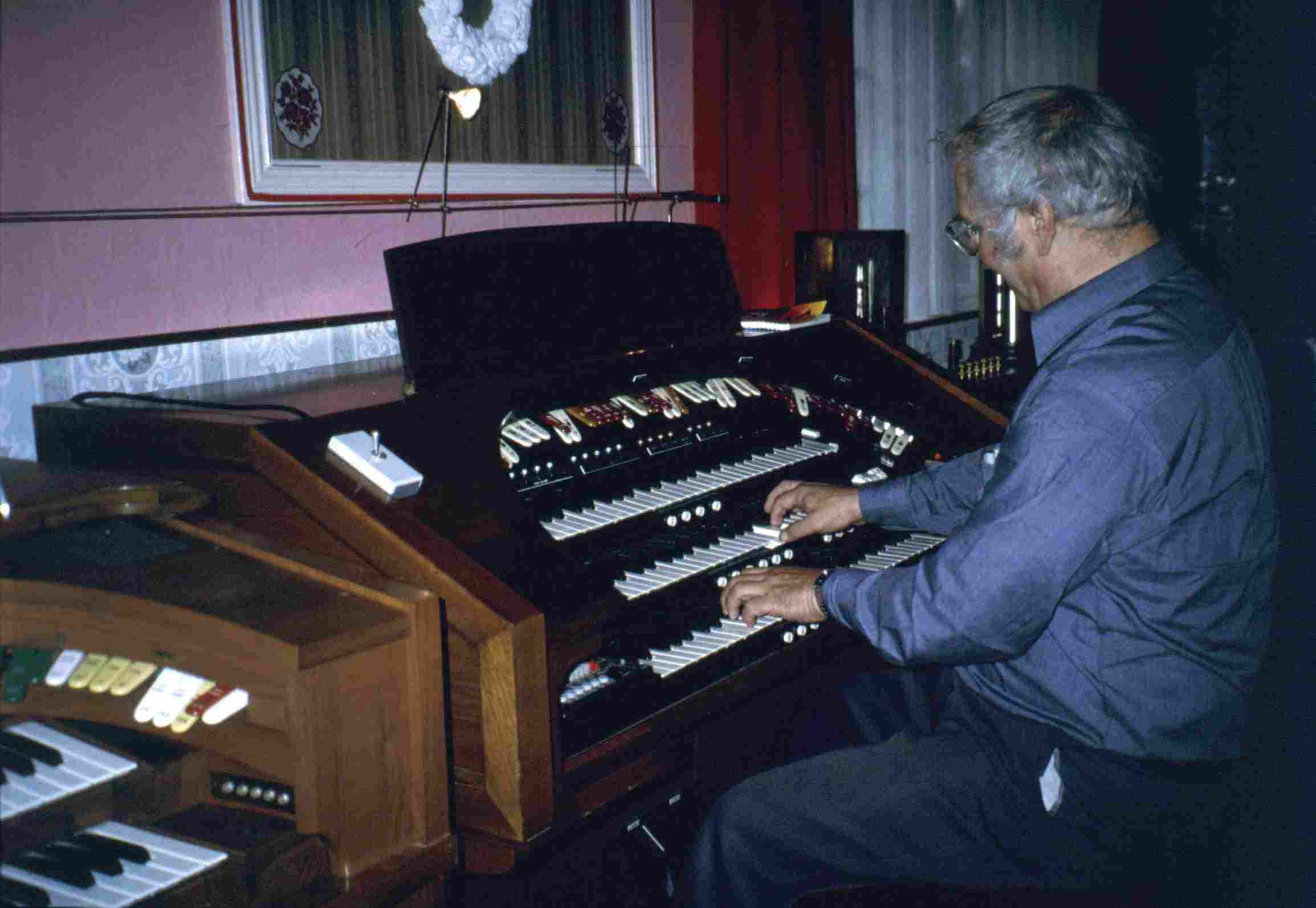 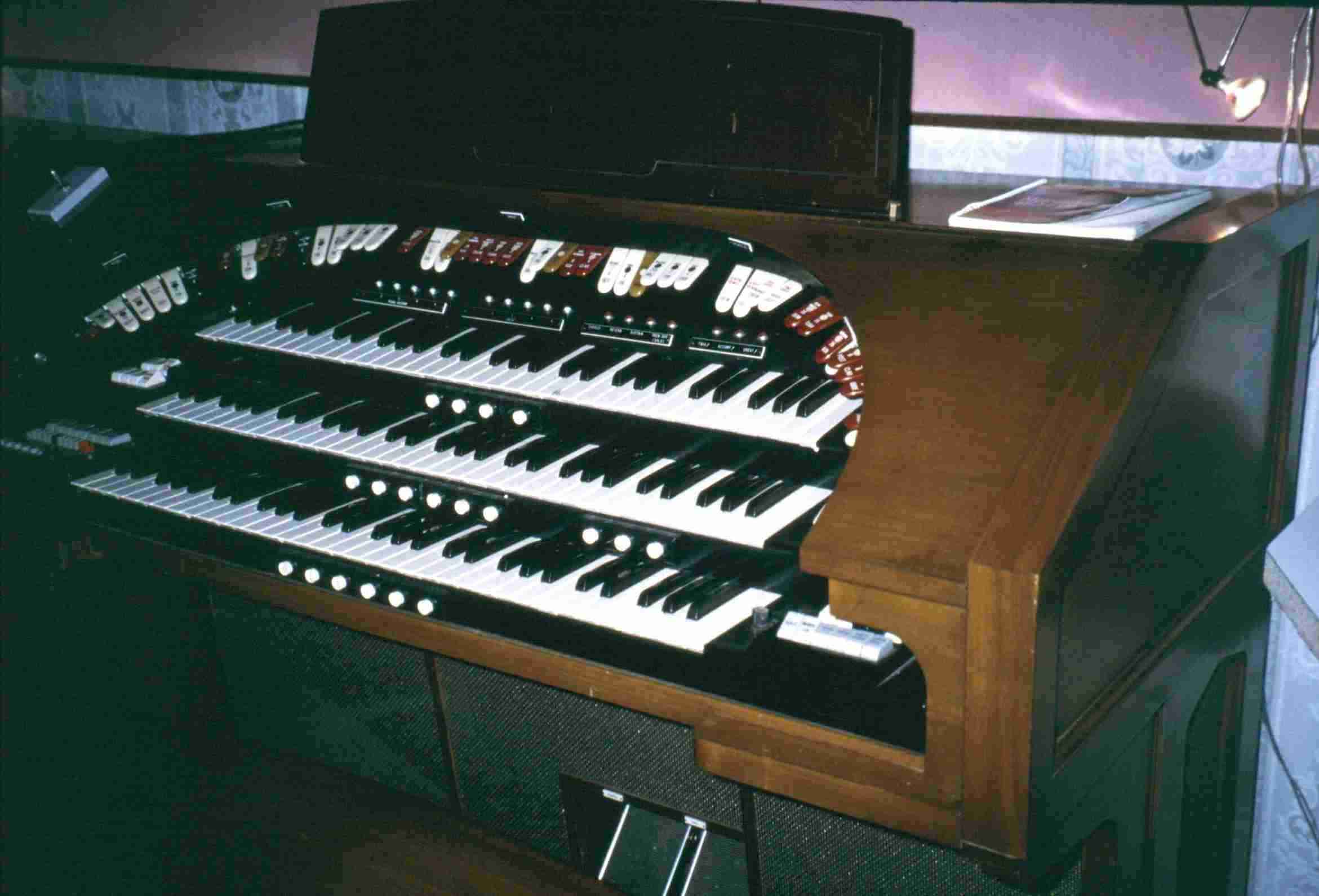 Fig One: Anton Stormlund playing the Conn 651 at his Organ Museum in Denmark. Fig Two: Close-up of the three-manual organ

Charles G. Conn, a noted Indiana figure and politician, founded C. G. Conn, Ltd. in 1875 in Elkhart, Indiana.  The company became famous for their quality line of fine band
instruments.  They manufactured their first electronic organ, the 2-D Connsonata, in 1947.  Their first commercially successful organ was produced in 1951.  In 1955,
the Artist model was introduced as the Model 700.  This instrument had two 61-note manuals and 25 pedals.  The manual stops were all at 8’ pitch and produced octave
and mutation pitches through a plentiful supply of couplers.  This made the Model 700 somewhat a harmonic synthesis organ.  There were separate tremolo oscillators
for each manual, and they both ran at different speeds.  This was the organ that Ken Griffin used on some of his last recordings.  To my knowledge, he recorded five
songs on the Conn organ; they were Elmer's Tune, Side by Side, Louise, The Blonde Sailor and Sunday.  Conn later revised the Artist from the ground up and made it
a 32-pedal organ with conventional stop control.

Conn used an independent tone generator for each note and employed special keying circuits to slow down slightly the attack of the notes, imitating the lag of a pipe organ.
This intentional slow attack and bold voicing of the Conn organ produced an instrument that bore an uncanny resemblance to a pipe organ for purchasers in the
mainstream commercial market.  The Conn organ was famous for its string tone; if you closed your eyes, you’d think a real violin was playing.  As the years progressed,
so did Conn, and many features that the home organist wanted were also included, such as Chimes, Piano, Sustain, Repeat Percussion and much more.  There were also
exclusive features unique to Conn, such as Stereo Expression Pedal, Phantom Bass and Calliope Tuning.  They even had sets of electronic pipes, which were actually speakers
that could be attached to any model.

Conn was a popular and formidable competitor in the electronic organ market.  They produced organs of every size for every need from the small spinets Caprice and Minuet,
to the mammoth Model 651 3-manual theatre organ pictured on this page, and every step in between.  There were home and theatre spinets (the Theatrette (one version was
a 3-manual spinet!), home and theatre consoles (the 643 theatre model is seen here in the Evangelical Spiritual Church, Cicero, Illinois; this organ has been replaced),
church and theatre concert models (Classic (800 series), 650, 651, 652, 653).  The 650 series were all 3-manual theatre organs.  They also made 3-manual church organs and
custom-built organs.

Don Baker played on Conn when a theatre pipe organ was not available and was a representative for them.  Don Kingston also represented Conn.  George Wright recorded two
albums on the Conn organ as well.

In the late 1960s, Macmillan & Co., a publisher of textbooks for school use, purchased the Conn Organ Company.  This transaction did not include the rest of the Conn
operation, which continues to operate today continuing the great tradition of Conn band instruments.  In 1979, Conn was one of the first big organ companies to go out of
business, but it was taken over shortly thereafter by the Kimball Piano & Organ Company, and soon the whole organ operation of Kimball and Conn passed into oblivion.

Hi.
I was surfing the web when I came across your website. I noticed that the organ that sits in my living room is the very same organ pictured in figure. 3. It is a Conn Classical
Model # 621F Serial number 612893.

The organ was handed down to me from my friend's Mother who was also named Anna. Anna used the organ to teach and entertain the neighborhood children. I myself have
had the organ for over 12 years. It is in great shape!!

Update:  Anna was unable to sell the Con 621F before moving house but a neighbour is taking care of it until then. Therefore if you are still interested in this Classic organ please get
in touch. Though, I should add, the neighbour has quite fallen in love with the instrument.